A Future Without Pain? 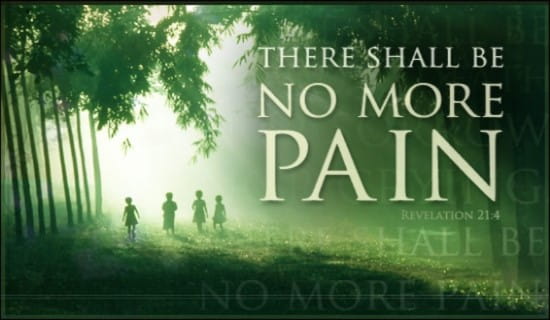 I recently finished with one of those Bible reading programs you can find on a popular Bible app.  They usually come with a relatively short Bible passage and a quick devotional.  I was drawn to this one because it claimed to have been written for those in chronic pain.  The Bible is certainly not silent on suffering generally or pain specifically. So, I was curious what approach the author of this reading program would take.

It was only a twelve-day reading plan and there were some good scriptures to consider and a few helpful things were said in the daily devotionals.  Honestly, most of what was said struck me as glib and fairly shallow.  It came across more as encouraging hurting people to just have a positive attitude rather than going deep into the suffering of others. He did not come across to me as someone who actually deals with chronic pain.

12 The Lord blessed the latter days of Job more than his beginning; and he had fourteen thousand sheep, six thousand camels, a thousand yoke of oxen, and a thousand donkeys. 13 He also had seven sons and three daughters…15 In all the land there were no women so beautiful as Job’s daughters… 16 After this Job lived one hundred and forty years, and saw his children, and his children’s children, four generations. 17 And Job died, old and full of days.

The basic message was Job had it really rough but God blessed him even more than what he had lost originally.  So, we should see our pain as leading to a greater blessing one day. Certainly, the text does say that God blessed Job more later than he did before his trouble began but I am not sure how applicable that is for those in chronic pain.  I have made the case that we are better off through our suffering in terms of character but what happened to Job–where he gets back more than he ever lost–is surely atypical.  Or is it?

First of all, it is good to remember that just because Job received more children later they did not replace the loss of his first children.  That’s just now how it works.  Grief and the loss of children is a different focus than this post or even this blog but Job was dealing with far more than just pain.  Most people in Job’s day assumed that when things were going well you were blessed by God but that when things went south then you were being punished by God.  But the story of Job disproved that assumption.  Job’s blessings were not about merit (how good he was) and his suffering was not about judgment (how bad he was).

That God restored Job’s fortunes points to something greater than Job could have ever experienced in this life.  You may be in chronic pain for the rest of your life.  It may get worse than it is right now.  It may get better.  Maybe you will get your miracle.  Maybe they will come up with a cure for your disease.  But even if they do, life in this fallen world will still hand out more pain and suffering eventually.  The only way we can ever experience the uninterrupted blessings of God without the hindrance of suffering is a new world.

The Bible calls this future reality, secured by the victory of Jesus Christ, “the new heaven and the new earth.”  Don’t misunderstand me; we don’t have to wait until then to live under God’s blessing.  Jesus ushers in the reign of God where those marginalized by the cruelty of this world live especially under the blessing of God.  But we all long for a day when we will not hurt anymore, where even the worst moments that cannot simply be replaced by better fortunes in the future will somehow finally be healed.

John had a vision of such a place in the unfiltered presence of God.

Then I saw a new heaven and a new earth; for the first heaven and the first earth had passed away, and the sea was no more. 2 And I saw the holy city, the new Jerusalem, coming down out of heaven from God, prepared as a bride adorned for her husband. 3 And I heard a loud voice from the throne saying,

“See, the home of God is among mortals.
He will dwell with them;
they will be his peoples,
and God himself will be with them;
4 he will wipe every tear from their eyes.
Death will be no more;
mourning and crying and pain will be no more,
for the first things have passed away.” (Rev. 21:1-4, emphasis mine).

I know that on very difficult days it may be hard to hold onto a reality for an unspecified date in the future.  But for me, it matters that I believe there will be a day when pain will be no more.  It matters that one day God will wipe away my tears.  It may not make the pain go away right now but it does remind me that pain does not go on forever. God has secured a future for his people, one that was better than even Job got to enjoy in the days following his suffering. 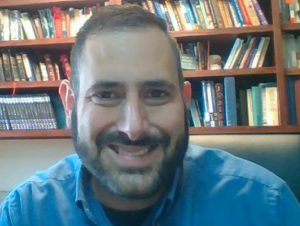